Change Starts With Us - what works to reduce bullying?

In Anti-Bullying Week 2019, we worked with young people to launch our Change Starts With Us Report. Children have set out their recommendations for change from tech companies, government, media, parents and schools, and our  poll suggests that many of them miss school and avoid spending time with friends to escape bullying. 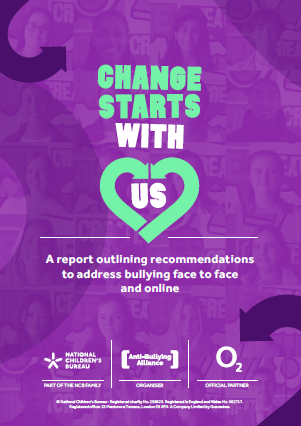 The survey of over 1,000 11 to 16-year-olds, published by the Anti-Bullying Alliance ahead of Anti-Bullying Week 2019, showed the scale of bullying that children are experiencing on a day-to-day basis, with nearly a quarter (24%) saying they have been bullied once a week or more during the last six months. Nearly one child in every classroom (3%) said they are bullied every day.

One in ten children (11%) said they have missed school due to bullying. Even greater numbers have changed their route to school (14%) and nearly one in five (19%) have steered clear of spending time with friends to avoid being bullied. A similar amount (19%) have avoided social media and online gaming because of bullying, underlining how being bullied as a child can have serious repercussions, often lasting well into adulthood.

Anti-Bullying Week, supported by O2, urged everyone to remember that ‘Change Starts with Us’ underlining how everyday acts like listening to young people, having a conversation, thinking about the impact of our words or stopping before hitting ‘like’ on a hurtful social media post, can all help to reduce bullying.

Children highlighted where they thought change should start, with over three quarters (76%) of those polled saying that social media and gaming platforms should do more to change the way they address bullying, and nearly half (48%) saying their schools should do more. More than four in ten (44%) of children said that the media and influencers had the power to reduce bullying.

Three quarters (73%) of children said that adults needed to step up to help tackle the problem, and a quarter (25%) said grown-ups were not good role models for online and face-to-face behaviour. Some children reported having seen grown-ups bullying each other either in the community (10%) or online (9%). Nearly a quarter of children (23%) said their parents had not spoken to them about bullying.

Working with young people, the Anti-Bullying Alliance and O2 published a report setting out young people’s recommendations about what we can all do to address bullying: